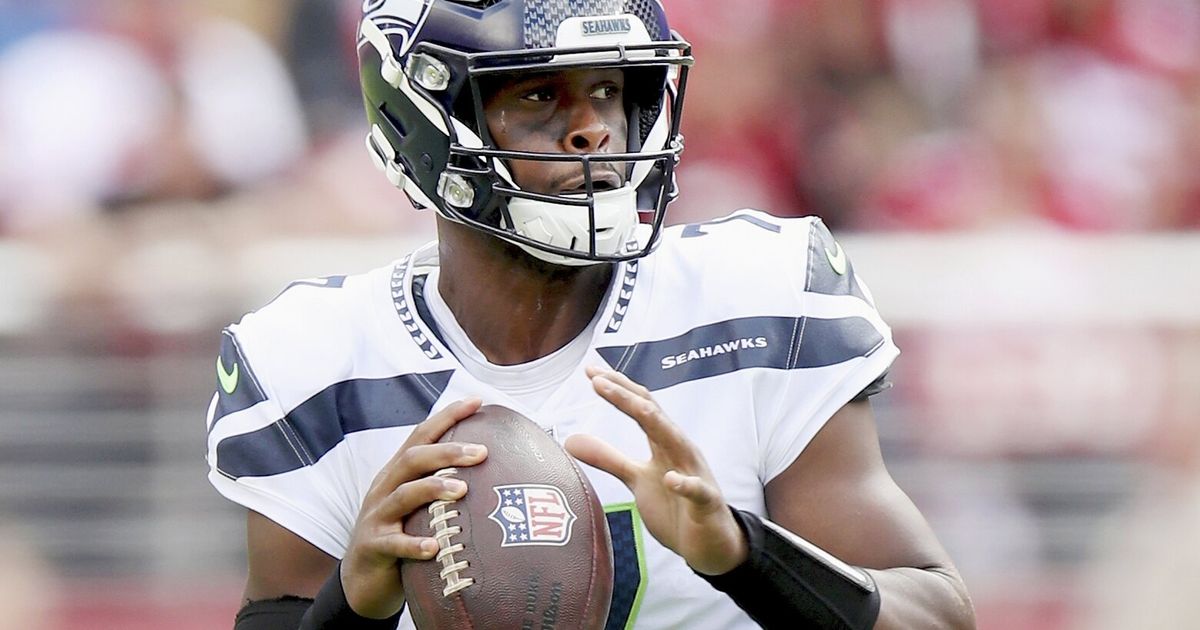 RENTON — Seahawks coach Pete Carroll said Monday one way to revive an offense that has gone six straight quarters without scoring is to “not hold back at all” in the passing game.

While that may be an easy comment to interpret as the Seahawks suddenly letting the ball fly everywhere Sunday against the Atlanta Falcons, quarterback Geno Smith and offensive coordinator Shane Waldron cautioned Thursday it’s not that cut-and-dried.

Smith said he hasn’t turned down any chances at deep throws that might have been there at the sake of being safer with the ball and said he doesn’t play to alter that philosophy now. Smith and Waldron said Seattle’s first two opponents — Denver and the 49ers — have played predominantly shell coverage, typically with two deep safeties, to try to keep things underneath and contain DK Metcalf and Tyler Lockett. And they expect Atlanta to try a lot of the same.

“We are just going to take what they give us until they start to play us more in man coverage and up in our faces,” Smith said. “It doesn’t make sense just to try and air it out just for the sake of doing that. I’m always going to take what they give us and try to be efficient on offense. That’s the main goal, to be efficient and to move the ball to score.”

Said Waldron: “It’s something that is going to around for a while and we’ve got to do a great job running the ball and taking checkdowns and taking what the defense gives us and staying efficient and that mentality that a shot called doesn’t necessarily mean a shot taken so that we can stay nice and efficient as an offense.”

So what did Carroll mean then?

Well, possibly that the team will try to call more longer-developing “shot plays” to try to get big gains through the air — Seattle had only one pass of longer than 17 yards against the 49ers — now that the team feels more comfortable in the ability of rookie tackles Charles Cross and Abraham Lucas to hold up in pass blocking.

Certainly, Smith can’t be faulted for not taking what the defense has given the Seahawks, having completed 81% of his passes so far, which leads the NFL.

His one interception this season, Sunday against the 49ers, came on a deep pass to Lockett in double coverage, one of the few times Smith has appeared to force the ball this year.

“I haven’t felt hindered,” Smith said. “I think we are, again, staying on schedule and doing what it takes to be an efficient football team and play complementary football. We are not trying to go out there and throw the ball up into double coverage.”

And the real key may not be Seattle changing the plays it is calling but running the ball well enough to force defenses to have to bring a safety up closer to the line of scrimmage.

Seattle gained just 36 yards on 14 carries against the 49ers, which didn’t compel San Francisco to have to change it tactics. Especially once the 49eres built a 20-0 halftime lead, which further compelled San Francisco to worry mostly about giving up big plays.

“As the run game begins to come along more and as we continue to stay efficient, they are going to get tired of the completions and things like that,” Smith said. “They are going to press us, get in our faces, and try to make us beat them by getting behind them, which I have full confidence in.

“The past two games, again, it’s been a lot of shell coverage. Even when there has been press coverage, the safeties are playing over the top, so they are really mindful of No. 16 (Lockett) and No. 14 (Metcalf) out there. We can expect that, they are great players. Offense is a collective thing, it’s not a one guy or two guy thing, so we all have to continue to develop collectively as an offense and figure out ways to move the chains and score points.”

What each agreed on is that the Seahawks simply have to figure out how to score some points — Seattle has gone 92 minutes and 24 seconds since its last offensive score with the only TD against San Francisco coming on a blocked field goal.

Center Austin Blythe sat out practice Thursday with a shoulder injury a day after he was listed as limited. Blythe has played every snap so far, and there was no indication of an injury against the 49ers. Being listed as limited in practice one day and then out the next often is the result of an injury that happened in practice. Carroll didn’t talk to the media Thursday so there were no additional details on his injury and severity.

Three other players were also listed as out — defensive lineman Shelby Harris (glute/personal reasons), cornerback Justin Coleman (calf) and safety Joey Blount (hamstring) while safety Quandre Diggs (knee) and linebacker Cody Barton (shoulder/hip) were limited after being out on Wednesday.

Coleman and Blount missed the 49ers game and appear in danger of sitting out against Atlanta as well. If Coleman is out, that would likely mean another start at nickel for rookie Coby Bryant.

— Here’s what Waldron said on what was one of the key plays of the game, an interception thrown by running back DeeJay Dallas out of a four-running back formation on a pass intended for Metcalf: “I know I think he’s out there and competing. We have a red zone opportunity and DK maybe had a chance in the back, but I know I think I can do a better job putting us in the right position when we are in those red zone situations. I love DeeJay going out there and competing and I’m just bummed for him that it didn’t work out the way it was planned.”

— And here was Waldron’s explanation of Lucas being called for illegal man downfield that negated a 49-yard completion to Metcalf on a double pass in the second quarter: “The league has a made a point of emphasis as far as being really strict upon where that 2-yard variance is on where you can be downfield. The bad luck for him on that one is he ends up driving his defender downfield a few steps and as he kind of disengages there, you know just losing track of where he is at on the field. So, just reemphasizing to the guys on some of those plays where we know, ‘Hey, we can’t be downfield on the double pass.’ And I think it’s just a good rep to learn from there and the type of mistake that won’t happen again.”


Bob Condotta:
206-515-5699 or [email protected]; on Twitter: @bcondotta. Bob Condotta covers the Seahawks for the Seattle Times. He provides daily coverage of the team throughout the year.