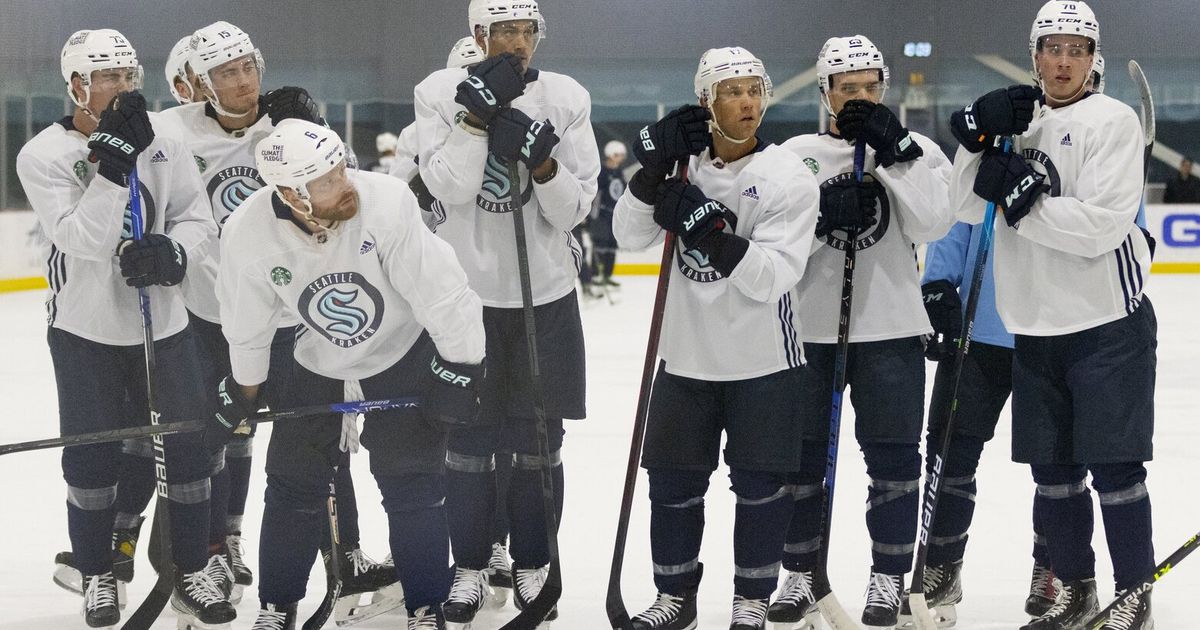 A knee injury cost Brandon Tanev half the 2021-22 season. But he was out with his teammates through the final, arguably worst event — sprints — as the Seattle Kraken training camp opened Thursday.

Tanev absorbed a low hit along the boards behind the Edmonton Oilers’ net during a home game Dec. 18. He suffered a torn ACL in his right knee and had surgery 12 days later. He was expected back in time for the start of this season and there he was, a full participant on Day 1.

He said he has no restrictions or nerves after the serious injury. He trusts the rehab process and the work he put in.

“Obviously it took a little bit of time. Learning to do things that came so easily,” Tanev said. “But I think once you’re back on the ice and back out there with your teammates and back in Seattle, you’re excited to be back here for training camp and ready to get the season started.

“At the end of the day, a little adversity doesn’t hurt anybody.”

There was a big spill in front of the benches that might have just been a skate issue. It was during the scrimmage while he had possession of the puck and instead of immediately turning it over, Tanev helped maneuver it to safety.

“I liked the way he dove back in. He was playing through traffic,” Kraken coach Dave Hakstol said. “That’s a good first step for him and a good Day 1.

“He brings a little bit of energy everywhere he goes, so it’s good to have him back in the room.”

Tanev refreshed his unusual, shocked-expression head shot Wednesday, a tradition dating back to his days with the Pittsburgh Penguins, when he claimed to have seen a ghost while having his picture taken. Seattle Seahawks running back DeeJay Dallas imitated the look in his own headshot this summer.

The Kraken were tied for fourth fewest goals scored in the NHL last season. A player expected to help out in that area, Oliver Bjorkstrand, kicked off the scrimmage scoring Thursday while playing on a line with Matty Beniers and Ryan Donato. Beniers quickly set up Bjorkstrand for an encore but it didn’t go.

“Good skaters can move the puck well,” Bjorkstrom said. “The offensive skills are there. If we’re together, we just have to make sure we play both ways.”

Bjorkstrand and fellow winger Andre Burakovsky were two of the most significant pickups this offseason, along with defenseman Justin Schultz. Bjorkstrand was the leading goal-scorer the past three seasons on the Columbus Blue Jackets, who found themselves needing to unload his salary.

“We got a lot better over the summer,” Kraken forward Jaden Schwartz said. “I think each guy’s hungry to prove ourselves and prove to each other that we can be a lot better, more competitive, and be in a lot better spot this year in March and April.”

Bjorkstrand could be part of many line combinations the next two weeks. Hakstol said he hopes to send out “lots” of players for the first half of the Kraken’s six-game exhibition slate.

“That will mean the guys have earned their way into those games,” Hakstol said.

Goaltender Philipp Grubauer riffed on his relationship with another new recruit. Grubauer was a season ahead of Burakovsky in heading to Colorado, then Seattle.

Grubauer is one of several players seeking a bounce-back season after a career-worst .889 save percentage in 55 appearances. He said he’s enjoyed working with new Kraken goaltending coach Steve Briere, who previously held the same position with the Toronto Maple Leafs.

“(We’ve made) small, simple changes that make a huge impact on the game,” the goalie said.


Kate Shefte:
206-464-8245 on Twitter: @KateShefte. Kate Shefte covers the Kraken and other Seattle-area teams for The Seattle Times.

Seahawks’ Michael Dickson to return to site of ‘The Aussie Sweep’

Colts promote Phillip Lindsay ahead of game against Broncos