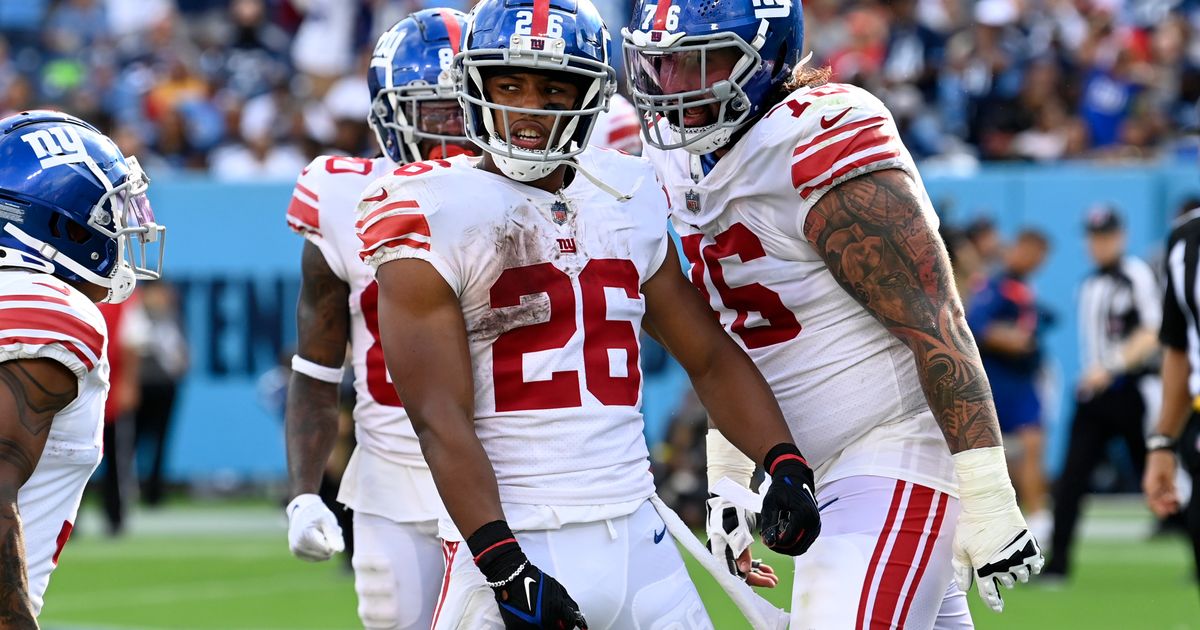 NASHVILLE, Tenn. (AP) — Daniel Jones hit Chris Myarick for a 1-yard touchdown pass, then found Saquon Barkley on a shovel pass for the 2-point conversion with 1:06 left, giving the New York Giants a 21-20 win over the Tennessee Titans on Sunday and making Brian Daboll a winner in his coaching debut.

Daboll didn’t hesitate to keep his offense on the field for the 2-point conversion, which snapped the Giants’ skid of five straight losses in season openers.

The Titans, the AFC’s No. 1 seed with a 12-5 record a year ago, had a chance to win as time expired. But Randy Bullock pushed a 47-yard field goal wide left after making two field goals earlier against one of his former teams.

Barkley ran for 164 yards and a 4-yard TD, his best game since Dec. 22, 2019, after topping 100 yards rushing only once in 13 games last season. He got the Giants going with a 68-yard run to set up his TD. Even though the Giants botched the snap on the extra point, that didn’t bother New York.

The Giants forced the Titans to go three-and-out on the next drive. Jones found Sterling Shepard wide open for a 65-yard TD with Tennessee cornerback Kristian Fulton beaten badly on the catch-and-run, tying it up at 13 midway through the third quarter.

It was a big improvement for a team whose longest run in 2021 was a 46-yarder by Barkley, with its longest pass play a 60-yarder to tight end Kyle Rudolph.

Tennessee answered with its longest drive to take the lead back. Tannehill capped the 75-yard march with a 23-yard TD pass to Dontrell Hilliard, his second score of the game, for a 20-13 lead late in the third quarter.

The Giants had a chance to keep it from going to the final seconds. They wound up outgaining Tennessee 394-359 in total offense despite being held to 133 yards in the first half.

Titans rookie Kyle Philips muffed a punt on a fair catch, putting the Giants at the Tennessee 11. But Titans safety Amani Hooker intercepted Jones’ pass in the end zone with 8:50 left after the quarterback stared down Barkley. Hooker signed a contract extension Friday.

The Giants brought rookie outside linebacker Kayvon Thibodeaux and defensive end Azeez Ojulari to Nashville only for both starters to be scratched before kickoff.

Giants rookie receiver Wan’Dale Robinson hurt a knee in the first half and didn’t return. He had one catch for 5 yards before the injury.

Titans left tackle Taylor Lewan limped into the medical tent after the first offensive play of the third quarter, but he returned for the next series. … The Titans lost safety A.J. Moore late in the first quarter to an injured ankle. He limped to the sideline following a Giants punt return. … OLB and special teams captain Ola Adeniyi hurt his shoulder late in the first half.

Giants: Host Carolina for their home opener next Sunday.

Reports: Queiroz could be back for Iran before World Cup