Seattle Privacy Coalition has blogged before about the aggressive marketing practices of ShotSpotterTM, the controversial gun-fire detection system that Seattle City Council wants to purchase. Now our friendly competitor news outlet The Intercept has blasted the story sky-high. When a sales pitch in Council Chambers is really a lobbying campaign by an international arms dealer, hold onto your wallet and your freedoms.

Here’s the Intercept article in a nutshell:

The article also spotlights the silly claims by company executives that ShotSpotter is not a listening device. As one helpfully explains, “It’s an acoustic sensor. It’s not a microphone,” which you can file under Distinction Without A Difference. And, as usual, ShotSpotter can’t keep its story straight. Our Oakland friend @marymad contributes this capture from the ShotSpotter Web site: 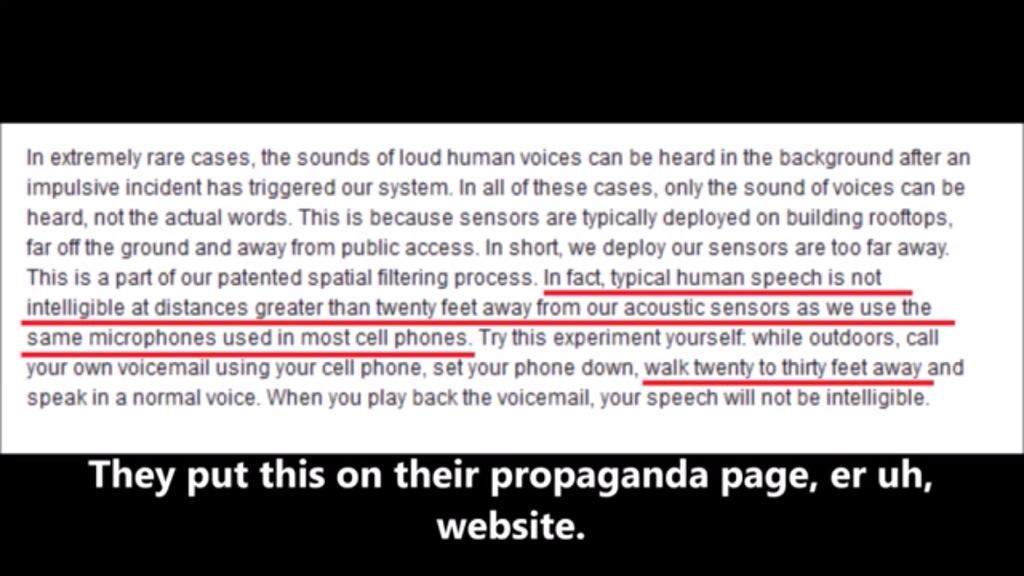 Just like a cell phone, eh? That explains why the 20-30 foot limit is nonsense, too. Cell phone users know that speaker-phone mode picks up anything loud enough to be picked up, regardless of distance. A conversation 100 feet away on a quiet street? No problem.

The Intercept piece concludes with this alarming assessment of the privacy issues presented by ShotSpotter’s audio surveillance:

ShotSpotter’s privacy policy claims this audio is “erased and overwritten” and “lost permanently” if its system does not sense a gunshot. However, even if this is true, the policy also states that ShotSpotter has detected and recorded “3 million incidents” over the past ten years. This also indicates the sensors report a staggering level of false alarms, and that the company has permanently recorded 18 million seconds — in other words, 5,000 hours or approximately seven months — of audio. According to a promotional document emailed to Miami city officials by ShotSpotter’s sales team, the technology allows end users to retain this audio online for two years and offline for another five.

The lessons here are not new:

We support the plan by Seattle City Council to closely review the money provisionally allocated to purchase ShotSpotter.